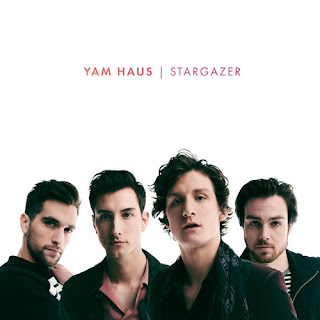 Yam Haus doesn’t waste listener’s time. They lead off their debut full length Stargazer with the title song and it’s certain to make a deep impression on both hardcore and casual music fans alike. Lars Pruitt will, naturally, garner much of the attention thanks to his position as the band’s singer, but rarely does a young unit emerge so polished and well rounded as Yam Haus. Wisconsin natives with a strong following in the Minneapolis, Minnesota area, the four band members first met and began playing together during their high school years and that familiarity with one another’s style and skills informs each of the album’s thirteen songs. The synthesizer fanfare opening “West Coast” mixes well with an intensely physical rhythm and engaging vocal melody. It’s as well rounded of a band performance you’ll hear from anyone and all the more impressive considering the band’s youth. There’s some discreet backing vocals dropped in during the song that enhances Pruitt’s charismatic touch.

Keyboards open “Kingdom” as well, but they occupy mix space in a song that’s more considered and patient than the energy bubbling over throughout the entirety of the preceding cut. Pruitt takes his voice in a different direction here, incorporating more higher register vocals into the mix, and guitarist Seth Blum lays some colorful fills around the drumming and synthesizer riffing. It’s one of the album’s best choruses as well. “Right Now, Forever” begins with an improbably retro slant and segues into minimalist acoustic guitar work. This is an excellent change of pace for Stargazer and the spectral piano makes it that much more appealing for listeners. Yam Haus, over the space of only a few songs, prove themselves capable of offering a lot of variety for serious and casual music listeners alike.

The title song’s reprise “You Need Love” is a much more stylized take on the opener’s straight forward style, heavier on electronica rather relying so much on the slashing guitar chords of “Stargazer”. The themes are much the same, however, just approached from a different angle than before. “Bad News” is an improbably successful piece of light soul/funk with a high pop sheen and Pruitt’s vocal style really stands out here. It’s one of the most commercially minded songs included on the album, but also serves notice that Yam Haus is capable of surprising listeners in a variety of ways. “Something Better” moves the band in the direction of “Right Now, Forever” with another emotionally affecting and delicately wrought acoustic track abandoning the electronic tendencies prevalent throughout much of the album. It closes Stargazer on a thoughtful note and in a way indicative of Yam Haus’ musical diversity. They aren’t content with pursuing one line of attack and the variety they bring to bear makes this an even richer listening experience.
album review indie rock music music review pop pop rock stargazer yam haus